With taking over the lead of the choirs in 1947 and 1950, a new era begann for all three choirs after the war. Wormsbächer, then just 24 years of age, not only managed to unify the choirs, but also influenced its musical development in a decisive way. This has manifested itself in many joint concerts in the Hamburger Musikhalle (Laeiszhalle Hamburg). Especially exciting were the debut performances (some for Hamburg), e.g. Messa per Rossini by Giuseppe Verdi and 12 other composers, or Messe solennelle by Hector Berlioz, which were both critically acclaimed by the German press.Hellmut Wormsbächer was a lecturer of choir management at the “Arbeitsgemeinschaft Deutscher Chorverbände” in Schleswig-Holstein from 1958 to 1996 and taught 250 choirmasters in over 150 seminars. His musical achievements were honored with the Johannes-Brahms-Medal by Hamburg City, the Heinrich-Paulsen-Medal by the “Sängerbund Schleswig-Holstein”, the Georg-Friedrich-Händel-Ring by the “Verband Deutscher Konzertchöre” as well as the “Bundesverdienstkreuz”, the Federal Cross of Merit.

On 15 October 1995 the Hamburg Oratorio Choir gave a concert in honor of Hellmut Wormsbächer’s 70th birthday, together with his chamberchoir “Bergedorfer Kammerchor”. To the regret of all choir singers Wormsbächer announced his retirement at the end of that year, handing over to Hans-Joachim Lustig after 40 very successful years. Two years later Thekla Jonathal took over. 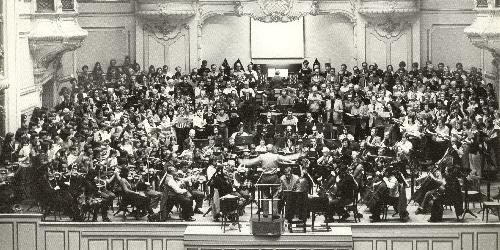