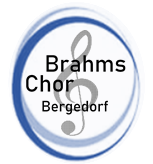 ∗ To avoid spam mails, @ has been replaced by [at].
Please use instead @ to contact us.

History: The Brahms Choir Bergedorf was originally founded in 1891 as the male choir “Chorvereinigung (Choral Association) Bergedorf-Sande”. The choir was a member of the Deutscher Arbeiter-Sängerbund (German Workers’ Singing Union), then the Deutscher Allgemeiner Sängerbund (German General Singing Union), and is now in the Deutscher Chorverband (German Choral Federation).
The choir was renamed to a “Volkschor” (folk choir) during the Weimar Republic, keeping good relations with the labour force, Social Democrats and Unions, and from 1920 women were admitted to the choir. In 1926, not only Brahms and Schubert but also battle and freedom songs were part of the choir’s repertoire.
In 1934, the folk choir merged with the folk choir Rothenburgsort and the male singing club Veddel to form the “Folk Choir Johannes Brahms”. Choral life expired during the war. After November 1945, the choir was called the “Bergedorf Folk Choir”, and on the occasion of the turn of the year 1946, it was awarded a contract by the German Trade Union Federation to present Beethoven’s 9th Symphony in the Hamburg Concert Hall – today the Laeiszhalle.
The conductor and choir leader Hellmut Wormsbächer took over the conductorship of the choir in 1947, and he held this position until the end of 1995.
In 1968, the “Bergedorf Folk Choir” was renamed to the “Brahms Choir Bergedorf”. It kept its autonomy not only as a registered association (e.V.) but also musically.
In the same year, the three independent choirs, Brahms Choir Bergedorf e.V., Folk Choir Altona (Hamburg Oratorio Choir Altona e.V. after 1974), Folk Choir Barmbek (Hamburg Oratorio Choir Barmbek after 1974) merged to form the choral association “Hamburg Oratorio Choir” for the purpose of performing great oratorios together.
Four trips led the choral association to Lausanne (Switzerland) in 1984, to Venlo (The Netherlands) in 1988, to Rome (Italy) in 2007 for a performance in St Peter’s Basilica, and to Buenos Aires (Argentina) in 2012 for a concert together with the Coral Todos Los Santos.
Between January 1996 and September 1997, the choir was conducted by Hans-Joachim Lustig, then by Hellmut Wormsbächer again on an interim basis until the end of April 1998.
Since then, Thekla Jonathal has held the conductorship of the three choirs.

The Brahms Choir Bergedorf celebrated its 125th anniversary in 2016 with a gala concert in the Laeiszhalle as well as a festive concert as part of the Bergedorf Music Festival in St. Mary’s (Marien Kirche) in Bergedorf.

Write us if you like to know more about us: